Nicaraguan strongman General Anastasio Somoza is making room for the modern jets sent down by his Cold War ally, the United States.   Will Martin, a 34-year-old Chicagoan, has just been through the humiliating collapse of a family business and is looking to make a fresh start.  So I Bought an Air Force is the wild but true tale of how Martin buys the Nicaraguan Air Force’s fleet of P-51 Mustangs, F-47 Thunderbolts, and C-45 Expeditors and struggles to get his planes back up to the U.S.

A civilian pilot without military training, Martin plans to hire former WWII pilots to ferry the planes to the U.S. for resale, with no intention of flying any of them himself. What he expects will be a straightforward, six-month transaction turns into a harrowing two-year undertaking during which he crash-lands three Mustangs after mysterious engine failures, shares Cokes with General Somoza at his compound, makes Nicaraguan headlines as a famous Chicago gangster, and survives attempted murder by an infamous CIA mercenary. He earns the nickname “El Gato” among the Nicaraguans as it seems he must have a cat’s nine lives.

With thirty-two pages of stunning photographs from the author’s personal archives, So I Bought an Air Force gives the reader a vivid look at the rough-and-tumble world of 1960s Latin America from the cockpit of some of the hottest American aircraft ever built. 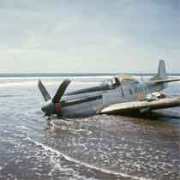